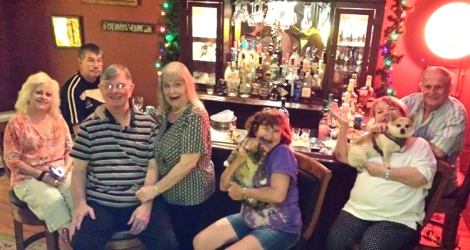 Be warned; always have a smile when someone takes your photo for Facebook. There I am, second from the left, and I lived to regret it!

I hear a lot of folks say that they don’t like being tagged in Facebook photos. I never understood the concern, especially when I hear it from people who I know wouldn’t be caught dead in Spandex, thank heaven.

In the age of social media, nowhere is safe!

On the other hand, there are those like my friend, Phil, who seem to think that every waking moment in his friends’ lives is worthy for capture on film to share with the entire human race. If you run into him at the supermarket, it’s certain that within minutes, your smartphone will ping with a notice that you’ve been tagged. You open it, and there you are buying a loaf of bread, along with Phil’s caption that makes like it’s the biggest deal since the merger of Exxon and Mobil Oil.

On the first floor of my newspaper’s office, there’s a spot called the Monkey Bar where a small group of us like to congregate. We share a few drinks along with the latest gossip, no big deal. Every time we go there, Phil insists on snapping a photo and posting it to Facebook. At his insistence, we all huddle around the bar with raised glasses and toothy grins, making out like it’s the most happening scene since Studio 54 in its heyday. I’m surprised that the collection of posts hasn’t attracted a line of A-list celebs, maybe even a Kardashian or two, to form outside the building’s front door each evening.

I certainly don’t mind this burgeoning album out there on the Internet with photos of me enjoying an adult beverage. At least I have all my clothes on, which is more than I can say for a lot of people, not to mention certain members of Congress. Still, after a while I began to think that Phil was getting a bit carried away. I found myself secretly wishing that one of his cats would find his phone lying around somewhere and go bury it in the litter box.

It was during our last visit to the Monkey Bar when I figured I’d had enough. When the time came for Phil to take his picture, I decided to make a subtle, silent protest. While everyone else posed as if he were shooting a scene for “Animal House,” I sat there glowering with arms crossed.

Evidently, Phil didn’t notice, because he snapped the photo and had it up on Facebook faster that any middle schooler could ever do. It was only after he posted it that everyone saw what I’d done. “Look at you!” my editor, Lauren, said. “You look like a Koch brother at a Greenpeace rally!” Everybody had a good laugh at my expense. It’s something I’m well used to and consider a big reason why people let me hang out with them.

I soon discovered that my ploy had given rise to some unintended consequences. Reacting to a disappointing turnout for a party we threw the following weekend, I suggested that it might be due to conflicts surrounding graduation season.

“Maybe, but there’s also a lot of buzz about that Facebook photo,” one friend confided.

“Only because of your wife. She was smiling in the picture.”

So to all you Facebook photo-phobes out there, you have gained my sympathy. The only advice I can offer in dealing with friends like Phil is to maybe invest in a ski mask. I know where you can get one cheap.