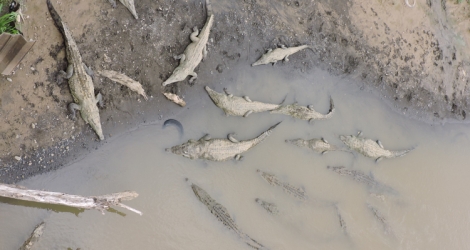 Crocodiles hanging out under the bridge over the Rio Tarcoles. Sure glad that bungee jumping wasn’t on the agenda for that day.

TARCOLES, COSTA RICA—We’d just finished lunch in this Pacific Coast town when our tour guide, Eddie, beckoned us to follow him on foot a short distance along the highway and onto a bridge. “Single file!” he ordered as we stepped onto the narrow walkway, vehicles whizzing past on the left and a precipitous drop on our right into the river below. This was an “adventure tour” after all, and Eddie seemed intent to deliver as advertised. 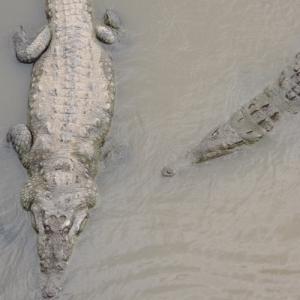 The studly Alpha male relaxes with one of his harem. Was that a cigarette I saw hanging out of his mouth?

He stopped in the middle of the bridge and motioned for us to look down, saying, “I count 32 in all.”

Crocodiles, he meant. There they were, huddled along the far bank, practically under our feet. I prayed that bungee jumping was one adventure that wasn’t on the day’s agenda.

“This is the Rio Tarcoles,” Eddie told us, “home to Costa Rica’s largest population of crocodiles. This afternoon, we will board a boat further downriver in order to get a closer look and learn more about these fascinating creatures.” 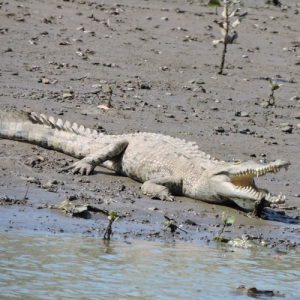 Eddie calls them fascinating; they call us lunch!

“I don’t know about this,” I said to my wife. “He calls them fascinating; they call us lunch.”

“Yes, see that big one in the middle,” she pointed. “I think he’s giving you the same look that you have when you sit down at Chili’s in front of a rack of ribs.”

Overhearing us, Eddie remarked, “That is the Alpha male. All the others you see are females that are part of his harem.”

“Man, if you could bottle his mojo, Costa Rica would have the biggest trade surplus on the planet,” I told him. 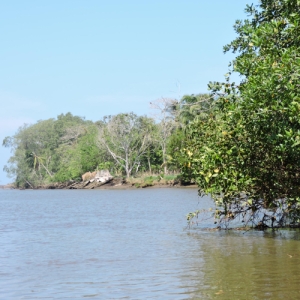 The mangrove forest downriver where the Rio Tarcoles empties into the Pacific. The non-Alpha crocodiles refer to it as the low-rent district.

That afternoon on the river, Eddie gave more details about the stud-like ways of the Alpha male crocodile. A single Alpha male—let’s call him Clint Eastwood—dominates a mile-long portion of the river. He alone will mate with the seventy or so females that live there and will get all of the starring roles on the National Geographic films. Sounds good for the Alpha males, but what about all of the other, non-Alpha male crocodiles? Well, they are all forced to hang out near the mouth of the river, where the food is lousy, and compete for bit parts in TV commercials. 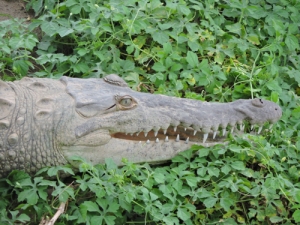 Think this guy looks ready to take on the Clint Eastwood croc? I don’t know.

Of course, all of the other males would die to become Alphas themselves, and as it turns out, many do (die, that is). Let’s say that a younger male crocodile—let’s call him Christian Bale—decides one day that he feels lucky and his time has come to be an Alpha. He would proceed to go up the river onto the Clint Eastwood crocodile’s turf and challenge him to a duel to the death. (I don’t know if .44 Magnums are involved.) If the Christian Bale crocodile wins, he would then tear the Clint Eastwood crocodile’s body to pieces and then post publicity photos of himself all along that stretch of the river to announce to the females there that there is a new Alpha male in town. National Geographic would then sign the Christian Bale crocodile to a lucrative film contract. This is why, unlike in Hollywood, you don’t see any crocodiles on National Geographic hobbling around on walkers still trying to come off as action heroes.

I’m not suggesting here that Hollywood go and adopt the Costa Rican crocodiles’ habits as a means to turn over the ranks of action movie superstars. On the other hand, I could see wording the practice into a Constitutional amendment regarding Congressional succession.