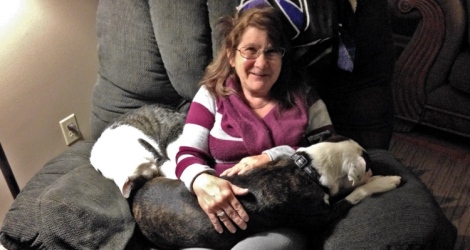 When I first suggested that we get a dog, my wife wasn’t keen on the idea. She’s not what you would call a dogophobe. She just viewed dog ownership from a mother’s perspective—it’s like having a kid who stays stuck the terrible two’s—demanding one’s constant attention while never being completely house-trained.

She agreed to the idea only when I caved to her demands that I be the one to feed him, walk him, bathe him, and do the thousand other things that make owning a dog seem like tending for an intensive care patient. She also made it clear that I should fear the day when she finds one of her prize slippers looking like it had been run through a stump grinder. 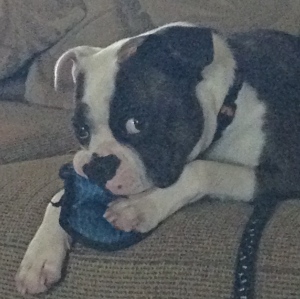 Who could not fall in love with those eyes?

When I brought Buster home from the shelter, he of course had no clue as to the uphill battle that lay in store as regards my wife’s affections. That was probably a good thing, because he proceeded to just do what comes naturally. All it took was one gaze at her with with those big, loving eyes, one set in white and the other in fifty shades of brindle, and suddenly she’s wanting to make him the beneficiary on our retirement accounts.

Buster turned out to be a model citizen, and this further cemented their relationship. He never had an accident in the house, and he seemed to instinctively know what it’s okay to chew on and what would earn him and me a night out in the shed. If he were a human, he would never drive in the passing lane or leave the seat up on the toilet.

In reality, winning over my wife’s affections isn’t the hardest thing in the world, as is evidenced by the man she agreed to marry. The real challenge for a dog, or any member of the animal kingdom for that matter, is to earn the respect of a cat.

Buster got off on the wrong foot there. Being of the opinion that cats were vermin along with any other four-legged, non-dog creature, his reaction when he first saw our three felines was to go into eradication mode. The cats, which see themselves as the planet’s superior species, did not take kindly to this sort of stereotyping.

Eventually, it seeped into Buster’s dog brain that these “pests” were actually card-carrying members of our pack. I’m sure that this concept was about as foreign to him as is to us the idea that Jerry Springer’s show guests are members of the human race. I have to credit him for making the connection at all. 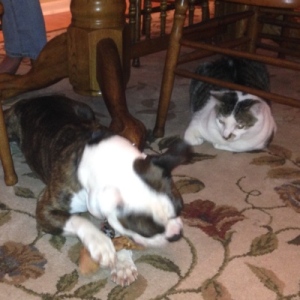 No, Buster, I’m not interested in tug-of-war, but if you want we could hit on some catnip.

Thus set straight, Buster tried to overcome the unseemly first impression that he left with his four-footed pack mates. He would bring them his rope toy in an offer to play tug-of-war and make similar overtures that, while perfectly logical to a dog, only served to reinforce the cats’ view of him as a fur-devouring psychopath. He eventually did win over Maverick, our big tom, but that is only because Maverick is the most dog-like cat you’d ever meet. If he could talk, Maverick would be inquiring with the vet about a species-change operation.

All in all, I must admit that Buster has more charisma than I could ever hope for. Everything I ever need to know about people skills I could learn from him. Hell, give me a rope toy and I could be elected President.

4 responses to “Fifty Shades of Brindle”