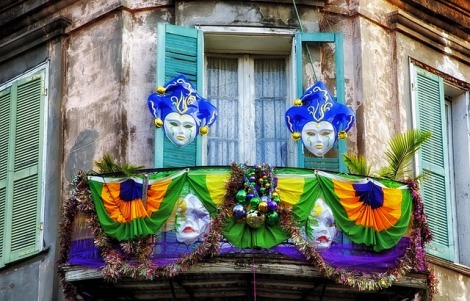 It’s Mardi Gras season again here in Southern Louisiana, and the parties are in full swing. Having spent most of my life in places where Mardi Gras is about as highly celebrated as National Kazoo Day, I feel like I’ve got a lot of catching up to do. To that end, my wife and I have five balls on our calendar this year. That’s five balls with five different live bands all playing that song which defines the Mardi Gras season for me. Of course, I’m talking about “Mustang Sally.” 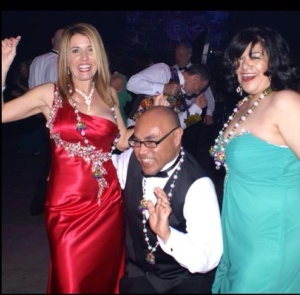 There’s no song like “Mustang Sally” to get everybody in a dancing mood!

These days, you can’t call yourself a dance band if you don’t know “Mustang Sally.” Crowds have come to expect that they’d hear the number at least once during the evening. You could have Fleetwood Mac playing at a Mardi Gras ball, and if they didn’t do “Mustang Sally”, everyone would go home disappointed.

I don’t know what it is about the song that makes it so popular, even among Chevy enthusiasts. You never hear them clamoring for equal time, insisting that the band also do “Little Red Corvette.” They might do such a thing at a   Washington, DC, affair, but never at a Louisiana Mardi Gras ball.

“Mustang Sally” is just one of several worn-down anthems that are sure to draw crowds onto the dance floor like paparazzi to a Kardashian sighting. Others include “Brick House” and “Play That Funky Music, White Boy.” I have friends who swear they would rather endure a root canal without anesthesia than hear “Brick House” one more time, yet these same people find themselves unable to resist the siren call to shake a lag whenever the band strikes up the tune.

I’m not a dancer myself, much to the relief of my wife’s podiatrist. That includes line dancing, even though it’s a simple dance form that was invented shortly after humans evolved into walking on two legs. The dance, if you call it that, involves shuffling your feet sideways a few paces, making a 90-degree turn, and then repeating the steps until you’re right back where you started. It’s sort of like driving through a strange city without the aid of Google Maps. 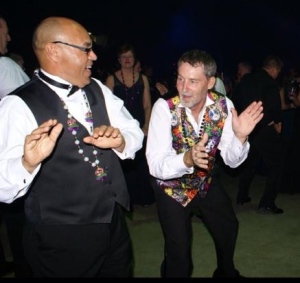 Hey! Somehow we’re right back where we started!

It used to be that there would be only one line dance per night, and that was when the band played a number called “The Freeze.” I don’t know where the song came from, as I’d never heard it on the radio, and if it weren’t for line dances, the tune probably would have dropped into obscurity along with The Partridge Family’s entire catalog.

But then “The Electric Slide” came along, also bypassing the Top 40 on its way into the line dance hit parade. The trend continued, with more and more songs being deemed appropriate for line dancing. It’s now got to the point where you can go to church on Sunday and tell who’s attended a ball the night before by noticing the ones line dancing to “Amazing Grace.”

I’m anxious to see how the music and dancing at Mardi Gras balls will continue to evolve. Perhaps a song will come along that evokes guests to amble about their tables and slurp down Jello shots. In that case I would be ahead of the curve.