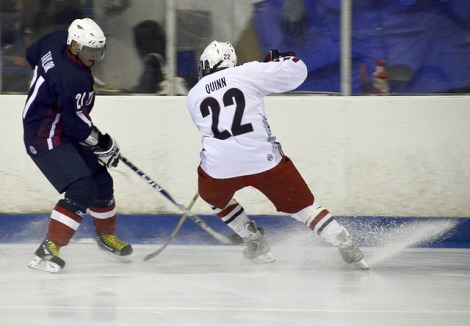 Is he going in for a forecheck or shaving ice for a margarita? Perhaps both.

Believe it or not, I wasn’t much into ice hockey when I lived in Yankee Land. I was of the minority opinion among the folks up there that ice was better used for margaritas than for playing a game on.

Lately, however, I’ve found that my opinion has softened. That’s due in large part to the efforts of my godson, Greg, who’s still trapped in Yankee Land and firmly sides with the majority. He’s such a hockey nut that he would kill to drink a margarita made from ice that was shaved off the playing surface by the skates of his idol, Washington Capitals’ forward Alex Ovechkin.

For the past year, Greg dogged me much as a trial lawyer would an asbestos exposure victim, not letting up until I, too, joined ranks of the hockey faithful. Eventually I caved, making the excuse that it would give us a common interest. It was either that or start listening to Blink-182, a band whose music has been successfully used on chicken farms to ward off predators.

Having thus decided to become a hockey fan, the first thing I had to do was to go find some hockey games to watch. This, I discovered, is a hard thing to do in Louisiana, we being such an ice-poor state, which in truth is not a bad thing. Luckily, there’s the Internet, where you can access coverage of any sport imaginable. If you’re into toe wrestling, you can go online and find a couple of feet duking it out any time day or night.

Ice hockey is a cult, and my godson is the high priest!

For hockey fans, there’s NHL GameCenter, which provides coverage of nearly every league game. I signed up and started watching. After a few minutes, my suspicions about the sport were confirmed—ice hockey is a cult.

Greg’s fanaticism was the first clue. But when you actually watch the game, you find other similarities. Chief among these is that with both cults and ice hockey, you have to believe in things that you can’t see. With a cult, it’s the leader’s admonition that he communicates through his cat with a superior intelligence from another galaxy. With ice hockey, it’s the puck.

It’s impossible for a mere human, even a sober one, to see the puck during a hockey game. That’s because it’s about the size of a Chiclet, and it’s the only matter in the universe that’s known to travel faster that the speed of light. Physicists, who’ve recently succeeded in detecting the elusive, subatomic Higgs boson particle, have to this day been unable to prove the actual existence of a hockey puck.

To compensate for the puck’s virtual invisibility, they use horns and flashing lights at games to let the fans know when a goal has in fact been scored. I’m not sure how anyone, the players and referees included, really knows when to activate the goal signal. They may just do it at random times, or if they feel a need to stir up some excitement because there hadn’t been a fight in the previous five minutes. Rarely does a game go that long between fights, which would explain why hockey is relatively low scoring.

Despite hockey’s oddities, or maybe because of them, I’m really becoming fond of the sport. I could tell you a lot more about it, but there’s a game on tonight, and it’s time for me to retreat to my private Alex Ovechkin shrine for some obligatory pre-face off meditation.