The only way to travel in Washington, DC!

While visiting Washington, D.C. during a recent trip to Yankee Land, I discovered why they don’t seem to get anything done in that town. Apparently, people there spend most of the working day lost on the Metro rail system.

I chose to take the Metro into D.C. with some Yankee kinfolk to do some shopping, figuring it would be less confusing that driving in a town that names its streets after letters and numbers, which they ran out of, resulting in multiple streets having the same name. Go to the wrong intersection of 7th and F, and you’ll see street vendors all right, but they wouldn’t exactly be hawking souvenirs, if you get my drift.

The Metro system has several Park and Ride stations conveniently located in the D.C. suburbs. It’s much safer to leave your car at one of these lots than on an unattended city street where there’s the risk of break-in. The lots employ uniformed security personnel who will dutifully watch your car while it’s being ransacked.

At the station, tickets are purchased by machine. They accept most forms of payment, including coins, bills, and credit cards. The problem is figuring out the fare, as it differs depending on where you’re going, the time of day, your filing status, number of dependents, etc. It’s recommended to consult with an accounting professional before purchasing your ticket. 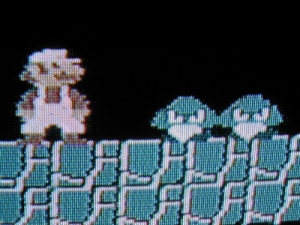 If you like video games, you’ll love the DC Metro!

The fun begins once you’re on the platform waiting for the train. If you like computer-based adventure games, then the Metro is for you. You must have your wits about you in order to navigate the maze and successfully arrive at the place you want to go. I sincerely believe that those people who got caught earlier this year inside White House were actually Metro passengers who missed their stop.

It’s important to note which color line will take you to your destination. Our station serviced two lines—the Green and the Yellow. The names aren’t much help, as all of the trains are the same hue of silver. Your only clue as to which line a given train is running is the fine print on the first car as it rushes past before stopping on a dime, hurtling all of the passengers forward and compressing them into the front two seats of each car. This is how they clear the doors for those waiting to board.

Even if you’re lucky enough to board the right color train, you’re still not home free. There’s still the issue of getting off at the right station. To help with this, a conductor announces the name of each one as the train pulls in. Unfortunately, they do so over loudspeakers that sound like they were salvaged from 1970’s-era fast food drive-thrus. What’s worse, the conductors apparently were not hired based on their ability to articulate the English language. At one stop, the only words we could make out were “Civil War,” no doubt referring to a nearby museum, although some in our party wondered if the train was actually traveling in time.

Not sure where I am, but at least I can get outta here.

We got off at what our senses told us was most likely our stop. And though there was no funky music like you hear when you’ve just completed a video game level, my bearings led me to believe that we were in the right part of town. It was all good, provided there weren’t any Abraham Lincoln sightings.