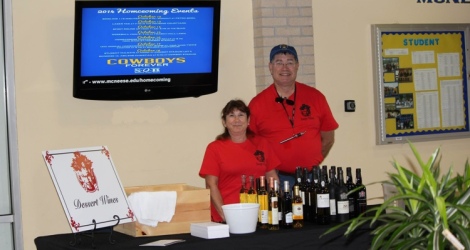 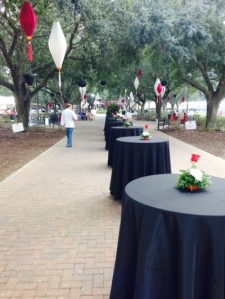 The tables are set for the onrush of thirsty wine entheusiasts!

My wife signed me up as a volunteer pourer at the recent Rouge et Blanc wine and food extravaganza, held for the benefit of the Banners Series at McNeese State University. I don’t know what ‘Rouge et Blanc’ means, since I don’t understand Japanese. But from what I gather about wine drinkers, it probably means something along the lines of, “Washing Down Smelly Cheese with Expensive Fermented Grape Juice.”

I don’t know what it is with these wine people, scheduling it on a Saturday during football season, and with the baseball playoffs going on to boot. Beer drinkers would never think of such a thing.

Needless to say, I wasn’t happy about it, particularly when she explained that I had to be there an hour early to attend a class on how to pour. The idea dumbfounded me. Wine is easy to pour; it’s beer that’s hard. That’s what they should teach classes on, being how I’ve had to wait until closing time for the foam to settle on some beers I’d been served.

“The class is to show you how to pour the right amount,” my wife explained. “You’re supposed to do one ounce per glass.”

“Only an ounce?” I had to wonder about people who drink wine an ounce at a time. This was sounding even more like a bad idea. “Give me one good reason why I should do it,” I told her.

“Because when it’s over they let the volunteers drink the leftover wine.”

“And how much is it again that we’re supposed to give people?” I asked. 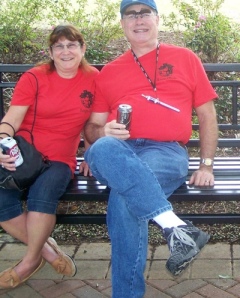 Dang and Lady Yankee take a moment to catch their breath before a long, arduous afternoon of pouring.

“That much?” I replied. Well, okay, why not spend an afternoon pouring a little wine? Better yet, maybe I should bring a syringe to measure it out.

At the pouring class, I learned that if a guest had an ounce of every wine available, it would be the equivalent of roughly six bottles. Clearly, I wasn’t giving these wine drinkers enough credit. They also assured us there would be a representative available at each table to answer questions, so all we needed to know was how to pour a perfect ounce.

That was reassuring; being how when we arrived at our station and inspected the labels, I figured it would have taken me the rest of the day to just learn the names of the wines. Each one had more words than the job title of a bank executive. But when the gates opened, no representative had yet joined us. I started wishing that we’d been assigned instead to the Boone’s Farm table. “Strawberry” I could handle. 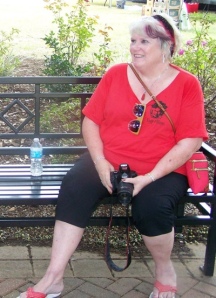 And Jackie is ready to record it all on camera!

Before we knew it, thirsty patrons descended upon us, souvenir glasses in hand. The questions started coming. “What’s the difference between the Muscat and the Moscato?” one lady asked.

“Okay,” she replied, “give me some of that, then.” My respect for wine drinkers went up another notch.

The promised wine expert never did show at our table, leaving my wife and I to wing it. I decided to use the situation to my advantage. For instance, there was one brand at our table that I was quite interested to try, so I had to make sure some would be left over. When people would ask my opinion of that particular wine, I would respond with statements like, “well, this one has a texture of crumpled aluminum foil,” “the expressive chalk dust flavor neatly balances the tannins,” or ”it offers distinct notes of bat urine that linger on the palate.”

Despite such comments, they consumed every last drop. Either these wine drinkers weren’t the connoisseurs I’d imagined them to be, or they were into their sixth bottle by the time they’d hit our table. Probably a little of both, I imagine, but criticism doesn’t seem appropriate coming from an unapologetic Lone Star drinker.