We’ve got a Halloween party coming up in a few days, which means it’s time to start thinking about a costume. It’s got to be something simple. Maybe my wife wouldn’t mind if I splatter some ketchup on her fur coat and go as road kill. More likely, she’d back the car over me, and I’d end up not needing the coat.

Speak of the devil, it’s the Dang and Lady Yankee!

I liked Halloween better in the old days, when it seemed that only kids wore costumes, and most of those were bed sheets with eyeholes gored out, normally where their ears were. Now, it seems that every adult party that falls in October has to be a masquerade. It would be okay if there just weren’t so many of them.

There are a number of problems concerning adult Halloween costumes. First off, you can’t get away with wearing something cheap like kids can. If somebody make fun of your costume, you can’t just blame it on your mother. Well, you could, if you want your next party invitation to include ice cream and pin the tail on the donkey.

I’ve only got eyes for you, baby!

That’s why going to a party store for a costume is also a bad idea. Costumes bought at party stores scream ‘Cheap!’, leading one to believe that they come from the same people who design Miley Cyrus’ stage outfits.

But that’s not all. Once you’ve put together that realistic-looking werewolf outfit—the one that you don’t want your neighbor with the rifle collection to see you in as you walk to the car—you know it’s only good for that one year. It’s amazing how people who can’t seem to remember to bring a covered dish have an amazingly long memory for what costumes everyone wore as far back as a decade ago.

Only a real man like Perry can get away with wearing a tutu.

That’s why a large portion of my closet is now dedicated to Halloween costumes, dating to before “Happy Days” was cancelled, that I’ll never wear again. The only way that I can figure to keep my inventory of old costumes from spiraling out of control would be to get a new set of friends every year, enabling us to wear the same thing year after year without fear of discovery. But seeing how long it’s taken me to get the friends I have now, that doesn’t seem like a practical solution. 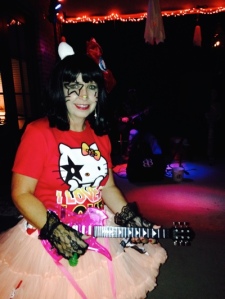 Sorry, Perry, she still looks better in it.

(For the latter, I wore a swimsuit and camped out by the pool in a lawn chair with a six-pack of Corona. Quite clever, I thought, until the cold front passed through.)

I’m thus resigned to the reality of an ever-expanding wardrobe of old Halloween costumes. It won’t be long before they take up every inch closet space, displacing my dress clothes. So be alerted; should you attend a wedding in the near future and see a werewolf stalking among the guests, you’ll know who it is.