There ain’t enough duct tape in the world to fix this!

My wife truly believes that, when a man puts on a wedding ring, it somehow bestows on him the power to be able to stop a leak faster than a speeding bullet. It makes me wish that I were living back when you still had to get all your water from a well.This evening was a perfect example. We’d just returned home from a week’s vacation. I was in my home office catching up on some important business, namely, the American League pennant chase, when my wife came in to inform me that there was a “pinhole” leak in one of our pool hoses. 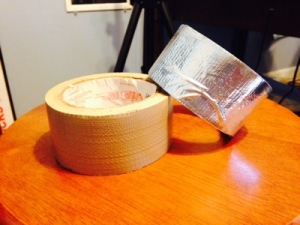 What’s in your tool box?

I grabbed my roll and followed my wife into the yard. She started the pump to show me the extent of the problem. It produced the same effect as if she’d opened a fire hydrant. I don’t know what kind of pin she was thinking about that made the hole, but it was clearly of a size that could land a whale. Even with my extensive duct taping experience, I knew I was helpless in that moment.

“I’ve got to replace that hose,” I told her. “We’ll have to leave the pump off. I’ll get the parts in the morning.” It was clearly not what she wanted to hear.

It was true enough. The area had had so much rain while we were gone that the neighbors all had pirogues moored in their driveways. My wife had always insisted on taking care of the pool by herself, and she was taking pride in the fact that she’d kept it algae-free all season. Now she was into the home stretch of September, and the pool was taking on a color like the world’s largest margarita.

I could tell by her expression that she was expecting a miracle. Trying to be helpful, she suggested, “can’t you fix it with a bungee cord? We’ve got plenty of those around.” I didn’t even try to understand where she was coming from with that one. She probably reckoned that they could have stopped the Titanic from sinking if only they’d had a few bungee cords around.

Still, I’d clearly let her down. To her, I was a bigger disappointment than the Mighty Casey had been to the baseball fans of Mudville. I can only be glad that she is not a poet.