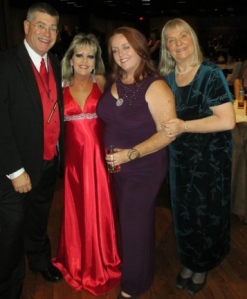 It’s Mardi Gras season again, I know. I need no other sign but to see my wife rummaging through the closet, looking for stuff to wear to the balls that are on our calendar. She’s got more evening gowns in there than Absolut has vodka flavors. Yet still she can’t seem to find anything appropriate.

Some she says no longer fit her. Others she wore to a ball last year and fears that people will remember. Like they keep notes on that sort of thing. Another is white. She can’t wear that, she says, because white is reserved for the King and Queen. She unknowingly wore white to the first ball we ever attended, and the reaction was as if she’d worn a fur coat to an animal rights gathering. There were a few other gowns that she claimed she didn’t have shoes to match.

I fail to see the importance of her gown matching her shoes. She and the shoes part company as soon as the band strikes up the first number. Maybe the gown police are on stakeout under the table taking notes on the shoes as well.

And so we have half a closet’s worth of evening gowns for which my wife has no further use. Give us a few more Mardi Gras seasons, and we’d have to give the whole bedroom over to gown storage and sleep in the closet.

It’s a good thing I don’t need much closet space for my formal wear. Being a guy, my requirements are meager. All I need is one pair of black trousers, a matching jacket, some black shoes, and a single white shirt that I send off to the cleaners in between weekends. Toss in a black bow tie and vest and a guy is set for the whole dang season.

Just white and black; that’s it. We’re like a bunch of male nuns. But that’s okay. Guys have no need to worry about matching colors or what goes with what or whether our outfit is in or out of style. And seeing how some of us dress for golf outings, that’s probably a good thing.

With ladies, however, it doesn’t end with the gown. There’s also the accessories. My wife has so much jewelry that I’m surprised it hasn’t drawn the attention of a fire-breathing dragon like the one that stole all the gold from those dwarves in “The Hobbit.” Sometimes, on the night of a ball, I’d wish a dragon did steal it, for it would preclude her spreading them all out on the bed and asking me, of all people, which pieces would be most appropriate. I, for one, would rather confront such a dragon than one of the gown squad, should my selection fail to pass muster. Dragons, I think, could at least be reasoned with.

As for me, I’ve got just one pair of cufflinks. There’s no decision involved. I used to have shirt buttons that matched, but they disappeared a long time ago. I can only last in a monkey suit for so long, and so when I get home after a ball, I peel off my shirt like I’m Clark Kent in a phone booth. Some of those buttons are probably now in orbit.

And the gown squad, I’m sure, is tracking their coordinates.