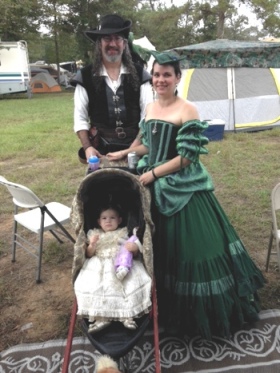 Nearly every year, my wife and I go to the Texas Renaissance Festival. This year, we pulled our trailer into the festival campground to discover that they’d made several improvements. Among these was the addition of showers.

“That should make for more pleasant encounters with our fellow campers,” I said to my wife.

“Yeah,” she answered, “but at five dollars a shower, I don’t know how many will actually use them.”

“Believe me,” I said back, “I’m sure there will be some who’d have no problem picking up a donation.”

The campground is a large, open area that’s first come, first served. You find an empty spot, park your car or trailer, and set up. Folks filter in all day Friday, and you never know who is going to pull in next to you. Hopefully they’ve got at least a couple of fives among them.

Fortunately, our neighbors turned out to be a fine group of folks, and what’s more, they came complete with a supply of home-brewed beer. The only thing they lacked was a bottle opener—something that I just happened to have. I carry one on my key chain for just such a contingency. You never know when you’re going to be out in a field somewhere and come across a group of thirsty beer-drinkers with an ample supply of beverage but no way to get at it, and would be ever grateful to someone who comes along with a solution to their problem. Let that be a lesson in preparedness. 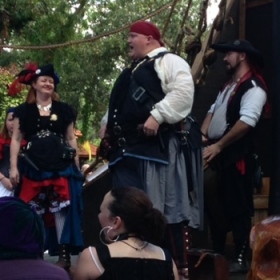 We met up with some friends from San Antonio, among them a couple with an 18-month-old girl. Being an empty nester for so long, I’d forgot what it’s like for a family with a young child to get ready to do anything. The government takes less time to commence work on a road construction project. I can only be thankful that an environmental risk assessment was not part of their process.

As it was, we passed through the gate into the festival at around eleven, just in time for the Texas humidity to kick in. We were decked out in our pirate gear, and strolling through the grounds with my shirt having absorbed the contents of the Dead Sea, I wondered how real pirates ever got along wearing all of this crap. No wonder they had such mean temperaments. I’d cut off my own leg just to shed some dead weight.

So why do we put ourselves through it? One reason is the entertainment. Another is that I like being addressed as “m’lord” whenever I receive service. Cell phone call centers should take note. It sounds nice—even, I’m sure, if said in a foreign accent.

And speaking of entertainment, where else can you have your choice of 20 different stages to be insulted from? My personal favorite at the Texas RenFest is the Polish Pub, which, I’ll admit, hosts the more risqué acts. There we saw the poet Arthur Greenleaf Holmes. He claims to be from 16th century England, but I doubt that the language had adopted that many terms for certain body parts by that time.

There’s also the hundreds of shops, where you can find everything from medieval clothing and hand-crafted jewelry to amethyst stones, touted as a “cure for drunkenness.” At first, I thought the idea to be outlandish, but then it hit me. If you’re drunk enough to eat stones, you probably need it.

All in all, the festival was a blast, and we’ll probably go again next year. I’ve just got to find a more appropriate costume for the weather. I wonder if a Garden of Eden theme would be appropriate.