This story originally appeared in The jambalaya News on September 6, 2012 and was awarded Fifth Place in the HumorPress.com writing contest for the 3rd Quarter of 2013. 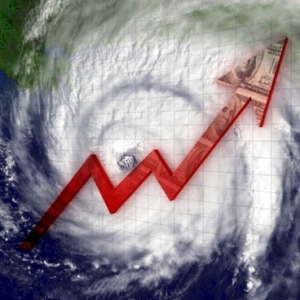 It’s September again here in Louisiana—the time of year when you turn on the local news and get, at most, five minutes of actual news coverage. The rest is evenly split between high school football and the tropical weather update.

“The National Hurricane Center predicts that this could be the most active season ever,” says the forecaster. Uh, huh. They say that every year, but nothing has come close to the Big Year of 2005, which brought us Katrina, Rita, and so many others that they ran out of names, that is, unless you know somebody who goes by “Alpha”. I also seem to recall that year, “The Hurricane Formerly Known as Tau.”

The fact is, the tropics have been in somewhat of a slump since 2008, and it’s left the news media chomping at the bit ever since. It’s been so bad that The Weather Channel’s Jim Cantore has had to go out and buy sunscreen.

There was a tad of excitement last year, when Hurricane Isaac made landfall in eastern Louisiana. Yes, Isaac was a hurricane, in the same way that the Astros are, technically speaking, a baseball team. But that’s no matter to the news media. They finally had themselves a bona fide hurricane to talk about, by golly, and they jumped on it like a bunch of rednecks onto dollar Lone Stars at the local honkey-tonk.

There’s a reason why tropical weather gets so much hype from the media. It’s because hurricanes, or even the mere threat of them, are big business. Consider that, back in the boom times of the early 2000’s, half of the toilet paper industry’s annual sales came from runs on supermarkets during the month of September.

Sure, toilet paper alone does not drive the U.S. economy, but no one would argue with the fact that we as a country would be in sad shape without it. Yes, oil is important, too, but given the choice between it and toilet paper, it would be no decision.

t’s true that the effects of tropical weather ripple throughout the economy. There’s no coincidence that the country’s worst economic crisis since the Great Depression coincided with the tropical slump that began in 2008. But you won’t hear that from the talking heads on television. They have an obligation to their sponsors—the very companies who profit from these storms. These would be the hardware stores, the generator manufacturers, and the insurance companies who get away with charging for property coverage as if an asteroid strike were imminent.

And it’s not just that. Storm coverage drives ratings, and without storms, the networks have to fill the void by coming up with actual programs. And so they have done of late, having spawned great new series the likes of CSI:Muskogee and Law And Order: Anti-Jaywalking Unit.

Oh, and we can’t forget the beer industry. They profit the most from hurricanes. This is because, with hurricane warnings, come evacuations. Governments have made them mandatory now, partially as a result of intense lobbying by the beer industry, but also to avoid looking like bozos as they did by not evacuating New Orleans in the wake of Katrina. So now, government officials as far inland as Colorado are issuing evacuation orders with efficiency uncharacteristic for a bureaucracy. Sometimes they get around to it before a storm makes landfall. Governors routinely warn their constituents that their very lives are in jeopardy if they decide to ride it out. Thus, they advise the citizenry to tattoo their credit card numbers on their forearms so that they can still collect taxes due.

The beer industry is riding this all the way to the bank. Evacuations mean long stays in a hotel room in some strange town that you would never visit for any other reason, except possibly to attend a wealthy relative’s funeral. After all, there isn’t much to do while being evacuated except to down a few cold ones—that and monitor the suspicious activity in the hotel parking lot, hoping that it’s not your car that’s attracting interest.
And let’s not forget the food companies. Hurricane warnings have caused so much hoarding of Spam and Beanie Weenies that the resulting stockpile could feed the nation’s populace for the next hundred years, and without it spoiling.

We’d just have to hope that we’ve also saved enough toilet paper to last that long, because we’d sure need it.