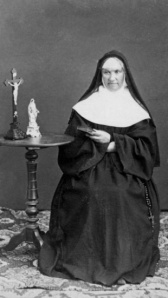 If there were such a thing as an endless summer, I never wished for one more than the one following my fifth grade.  Yet, even at that tender age, I knew better, and so I spent it counting down the days like a debtor would to a deadline imposed upon him by a mob hit man.

But it wasn’t a mobster that haunted my dreams that summer.  Rather, it was the sixth grade teacher—Sister Candida, or “Generalissimo Candida”, as we students at the Most Precious Blood School fondly called her.  Many a time during the year just ended would I look out through our classroom door into her domain across the hall, watching her as she wielded her chalkboard pointer like a cavalry officer.  That summer, my dreams were ravaged with visions of my own precious blood dripping from the end of that pointer, the result of my having mis-conjugated some verb or not knowing the capital of Albania.

I would have done anything to avoid my fate.  I considered running away to join the foreign legion, this despite the fact that our country did not, in fact, have a foreign legion, and even if it did, they would not be apt to take eleven-year olds.

And so my destiny was sealed, and that September, I passed through the Gates of Doom and into the Generalissimo’s domain.  And thought I’ve never been in the military—foreign legion or otherwise—I feel like I should qualify for veteran’s benefits as a result of that year.

The worst part of it was the homework.  Every night, it seemed, she would assign us to write a composition.  Her homework assignments would have driven William Faulkner to sheath his pen and harvest pecans in obscurity for the rest of his life.  My mother could have mulched her rose garden with the pencil shavings that I generated writing those compositions.  Had I developed carpal tunnel syndrome, any lawyer in town would have jumped to sue the Pallotine Order of Sisters for medical expenses on my behalf.

One day, when the time came for Sister Candida to announce the topic for that evening’s essay, she started off by reading from a letter she’d just received from a former student.  In the letter, the girl, then

in high school, thanked her former teacher for having been assigned so many writing projects while under her tutelage, claiming that she was better prepared for her current studies as a result.

I don’t know what the girl was thinking.  Putting such a letter in Sister Candida’s hands was more dangerous than if the king had given Blackbeard a commission to pillage galleons on the Spanish Main.  Her determination to develop each and every one of us into a future Pulitzer Prize recipient grew, as did the length and complexity of our homework assignments.  Instead of, “Describe Your Favorite Saint”, she would charge us to “Comment on the Writings of St. Augustine in the Context of the Roman Empire’s Decline During the Forth Century A.D.”

Invariably, she’d then brandish the letter.  “One day you will thank me for this, just like that girl!” she’d say.  I’m sure that letter now is preserved somewhere in the Vatican Archives.

Still, we failed to see how an improved writing ability would help us in our pre-ordained futures as professional athletes, television stars, and rock ‘n roll musicians.

As for me, it took a full forty years to recover from the severe case of writers’ cramp I’d developed that year and begin writing a newspaper column.  Nowadays, I’ll often wonder, after turning in yet another story about road kill, what Sister Candida would have thought of it.

I don’t have to think too hard.  If she were still alive, she’d be on the first plane to Louisiana, armed with her trusty pointer.