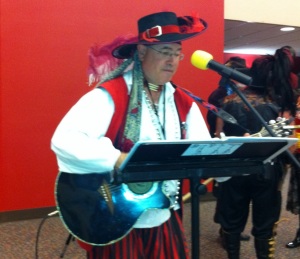 If you attended this year’s Contraband Days Festival here in Lake Charles, then you were in for a special treat. A man in pirate costume was seen strolling up and down the midway with a guitar, playing seafaring songs to the crowd. No, that wasn’t the treat; that was me. The treat was the kangaroos in the Australian wildlife exhibit. Even on my best day, I couldn’t upstage a real, live kangaroo.

I’m a member of the Buccaneers—the official pirates of Contraband Days. As Buccaneers, our job is to go out in costume and interact with the crowd. After all, what’s a pirate festival if there aren’t a few pirates out there bandying about? We’re not real pirates, of course. We could never hack the conditions that real pirates were subject to: living at sea for days on end in wet, cramped, and foul-smelling quarters, often with limited rations; conditions seen in modern times only on a Carnival cruise ship.

Real pirate or no, I was determined to try something a little different this year in my role as a Buccaneer. Pirates are known to have loved music and singing. I’m not saying that they were good at it. In fact, singing was one of their primary methods for torturing captives. Many a prisoner considered it a mercy to walk a plank into shark-infested waters rather than hear a group of burly sea dogs belch out another verse of “Yo, Ho, Ho, and a Bottle of Rum.”

That’s why I figured the role of a singing pirate would be a good fit for me. Even though we’re not real pirates, we try to be authentic. For instance, didn’t all pirate ships have a deejay on board, blasting hip-hop music from a 5.1-channel Dolby surround system, as we have on our parade floats? Well, maybe not, but I’m sure they would have put the technology to good use had it been available during the 1700s. “Please, take the gold and jewels, and the Marquis’ daughter as well!” I could hear the captain of a Spanish galleon cry. “Just cool it with the Lil’ Wayne, please!”

So, armed with my guitar and a handful of shanties, I took to the street at Contraband Days, not knowing what sort of reception might greet me. I walked up to the first group of people that I could find and went into my rendition of “Blow the Man Down.” After I finished, one gentleman remarked, “Hey, hearing that makes me wonder what you’re doing singing here out on the street.”

“Oh, really,” I beamed. “Well, thank you very much, but where else would I play?”

“Isn’t there a crow’s nest way up high somewhere that’s maybe out of earshot?” At least someone thought that I should be moving up in the world.

One tactic that I found quite effective was to stop in one of the food tents and play a few numbers for the people as they ate. There, I had a captive audience, and who doesn’t appreciate a little dinner music? I knew it wasn’t much, but hey, you can’t realistically expect a string quartet while you’re eating pork on a stick. I counted my performances there as a success. I didn’t get jabbed with any pork skewers, and I’m sure those ketchup stains from the occasional airborne French fry will come out in the wash.

I most enjoyed playing for the children. They were mostly scared when I would first approach. After all, a pirate with a guitar does not have the same amount of star power among toddlers as, say, Santa Claus. They probably saw me as more of a cross between Freddy Krueger and Keith Richards. Still, after bribing them with enough doubloons and beads and other trinkets, and sometimes having to buy dad a cold one, I was able to get their attention long enough for quick run through of the “SpongeBob Squarepants” theme. Not exactly authentic, I know. I, for one, could not imaging a group of burly seamen hauling up anchor while belting out, “Who lives in a pineapple under the sea…” It’s the mark of a true artist to know when to take license.

All in all, my performance went rather smoothly. The only exception was when I got too close to the Australian Kingdom exhibit. “Please, sir,” the exhibitor asked as I began playing “Whiskey in the Jar. “You’re disturbing the animals.”

“What’s the matter?” I asked. “Don’t the kangaroos and wanna-be’s enjoy music?”

2 responses to “The Shantyman”