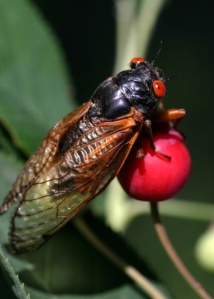 Yankee Land is bracing for another invasion this summer.  This time, it’s not the French, the British, General Lee, or even the Beatles.  No, this one is much worse.  They’ll be coming by the millions, seemingly from out of nowhere.  Not a single hamlet will escape the onslaught, the sight of their alien figures striking terror among the local populace.

No, I’m not referring to the snowbirds returning from Florida for the season.  This invasion is much wider in scope, affecting more than just the cafeterias and bingo halls.  There is only one horde capable of causing such widespread disruption to the Yankees’ way of life, and that is the periodical cicada.

Every 17 years, these creatures emerge from the earth and take to the trees to engage in their reproductive ritual.  The air resounds with the clamor of their mating calls.  Imagine it, if you will, being subjected all summer long to the incessant droning of a legion of six-legged lounge lizards.  It’s reported that in North Philadelphia, you can’t even hear the sounds of the gunfire over it.

The uprising lasts for several weeks, after which, their life purpose having been fulfilled, the cicadas expire.  The landscape then becomes littered with their spent bodies.  And while people struggle to clean up the resulting mess, the birds that inhabit Yankee Land’s Wal-Mart parking lots rejoice in the added variety to their typical diet of discarded French fries.

I was still living up there during the cicadas’ last emergence, and I remember how annoying it all seemed at the time.  But now that I’m here in Louisiana, I’ve formed a much different perspective.  The cicadas are nothing compared to the pestilences that we have to deal with on a yearly basis.  For example, I would gladly trade them for our twice-yearly love bug swarms.  Let them buy their windshield washer fluid by the 55-gallon drum, I say. See how they like having their radiator grills look like they’ve been used to filter industrial waste.

Meanwhile, I’m sure that folks here would put the cicadas to creative use.  Fishermen would rejoice at the bounty of free bait; duck hunters would have new objects for target practice; still others may be apt to put on a pot of rice.  On top of that, a cicada would make a much better high school mascot than a love bug, if for no other reason than the way it sounds.  (“Here come the Fighting Cicadas!”)  It’s enough to strike fear in the hearts of opposing schools on the football field.  But the “Love Bugs”?  That name could only sound threatening in the context of synchronized flower arranging competition.

Folks here would have no problem dealing with the cacophony of the insects’ mating ritual.  I admit that it might be a bit confusing at first.  For some, their first reaction to hearing such noise coming out of a tree may be to throw a string of beads at it.  Still others might start jumping up and down thinking LSU had just scored a touchdown.  But I’m sure people will eventually get used to it.

When you get right down to it, cicadas aren’t much of a pest at all, at least not in Louisiana terms.  They don’t bite humans, and they’re no threat to pets or vegetation or the paint job on your pickup.  All they do is make a bunch of noise all over town.  They are the Barney Fifes of the insect world.  What’s more, they only come around once every 17 years, putting them well below  in-laws visiting from out of town on the pestilence scale.  Here in Louisiana, we have gravel that causes more problems.