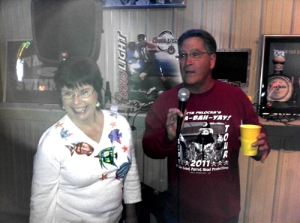 For most people, the campaign season mercifully ended a little over a week ago. Gone are the robo-calls, the signs, and the mudslinging TV ads. Sometimes it makes me wish we’d just go get ourselves a king and be done with it once and for all.

Our country would be much better off if elections were more fun. Take, as an example, the recent election for Vice President of the Pelican Coast Parrot Head Club. For one thing, it was short and sweet, lasting only as long as the band break at the club’s November meeting.

The race pitted the incumbent, Nancy Rogers, against an upstart challenger from the Toga Party by the name of Mike Guidry. It was obvious from the start that Mike had an excellent chance to unseat Nancy, as many of the club members were seen wearing sticky tags that read, “I Like Mike for VP.” There was no such material bearing Nancy’s name, and it was clear she had been outspent in the campaign by about a dollar fifty.

A member of the Pelican Coast Parrot Head Club proudly wears her “I Like Mike for VP” stickers. I think this is what sealed the election for him.

I came into the meeting undecided. I take my vote very seriously, and so I approached Mike to see where he stood on the issues. I asked him, “What’s your view on same-sex marriage?”

He answered, “My official position on this is that I would not consider leaving my wife for a guy.” I appreciated his decisive stand.

I was curious as to how much Mike’s other supporters knew about his platform. I spotted my fiend, Lana, wearing an “I Like Mike” sticky, and so I approached her and her husband, Randy, to ask if they knew where he stood on the same-sex marriage thing.

“Well, I’m not sure,” Randy said, “but I hope he’s for it. For every two guys who marry each other, it frees up two girls for the rest of us.”

Another friend overheard the conversation and chimed in. “Yeah, but I bet they’re both ugly.”

A lively debate brought the campaign to a close. There was one issue on the agenda, and Mike made his point succinctly. “Let’s just adjourn and vote, so that Jerry Diaz can get back up here and play some more songs from his new CD.”

Nancy gave a profound rebuttal: “What he said.”

Such are the politics of Margaritaville

2 responses to “The Politics of Margaritaville”