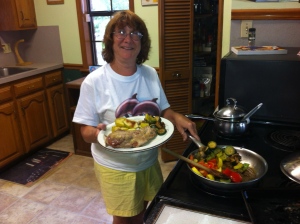 My wife recently bought one of those Rachel Ray cookbooks, and she’s been putting it to good use.  Since she got it, she’s prepared several delicious meals.  I‘d like to compliment her on her on it, but I don’t like to take those kind of risks.

I figure that doing so could haven three possible outcomes, and two of them are bad.  She could appreciate the compliment and thank me for it.  That’s the least likely of the three.  More likely is that she will take it to mean that I detested her cooking up until that time.  Ok, so what if I’ve rarely said anything good about her cooking over our previous twenty-seven years of marriage?  That doesn’t mean I didn’t like it.  She’s never complimented me on how I take out the garbage, but I don’t get hung up about it.

Still, if that were the worst that could happen, I would take my chances.  But there is a third possible outcome—one with potentially serious consequences.   Applying her wife-logic, she may deduce that, since she could learn how to cook better just by getting a book, then the same thing must apply for whatever tasks she would like me to do.  I could just see her coming home after a day of shopping at Books-A-Million, with a library’s worth of volumes on home improvement, auto repair, landscaping, and, God forbid, men’s fashion.  From here on out, I’d spend my weekends begging for Monday morning.

So I think I’ll just keep quiet and keep eating.  After all, you’re not supposed to talk with food in your mouth, right?

One response to “A Husband’s Dilemma”