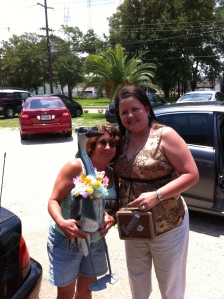 My wife, Susan, hands E.B. off to Tracy for the trip to Key West

Well, we handed E.B. over to her chauffeurs, Tracy and Chris, the other day, for the drive from Louisiana to Key West.

We’ll be flying, and we didn’t want to invoke the ire of bird enthusiasts by stuffing him in a suitcase and sending him with the checked baggage.  Besides, if we’d have done that it would have cost us more to send our baggage to Key West than it would have cost for our own tickets.  It would have been cheaper to buy E.B. a first class ticket, but that wasn’t a viable option either.  I was afraid he might try to peck the flight attendant’s eyes out if that they didn’t have any Cointreau for his margarita.

So, Tracy and Chris are driving, and they were happy to have celebrity like E.B. Heron as a travelling companion.  We’re also lucky they don’t know him very well.

The logistics involved in transporting a superstar such as E.B. are only slightly less complicated than planning for, say, the Normandy Invasion, and so Chris and I decided to do the only logical thing—that is, we let our wives handle it.

And handle it they did.  I haven’t heard anything from Tracy since, so either everything is going well, or his long neck has had an encounter with Tracy’s hatchet.  Tracy has a low tolerance for prima donnas regardless of their species.

We’ll be meeting back up with him—hopefully all of him—when we touch down on the island this Saturday.