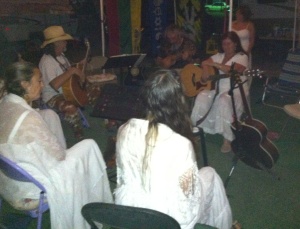 Last night was Goddess Night here at the Kerrville Folk Festival. It is the night where the women of our group, all dressed in dazzling white and adorned with flowers and other objects of nature, retreat to the serenity of Chapel Hill. It is a perfect setting for the Goddess ceremony, where the angelic souls commune in spirit, call down blessings for each other and their loved ones, and trade grocery store coupons.

No, seriously, I have no idea what those women do up there on Chapel Hill. That is because men are strictly forbidden from being anywhere near Chapel Hill (like in the same county) during the Goddess Ceremony.

My wife is one of the goddesses. So is Papa Duct Tape’s wife, Mama Char. Papa says that that makes us gods. I’m not sure it works that way. It doesn’t seem right that you can become a god by marriage. On Bewitched, Darin never became a warlock just because he was married to Samantha. I think “gods-in-law” would be a more accurate term.

The gods-in-law do have a role to play during Goddess Night. Once the ceremony is over, the women– spiritually cleansed and ready for the supermarkets on Monday–descend from Chapel Hill and come to the camp. There, the gods-in-law (what Papa affectionately calls the “He-Man Woman Haters Club”), are to play music for our heavenly brides. They goddesses say that they want light, uplifting, music that embodies the beauty of womanhood.

Darn. And I spent all day working on “Redneck Mother”.

2 responses to “The Goddesses”