I attended my first writers’ conference last weekend and was surprised to find that I was only one of a handful of men there.  It made me want to kick myself for waiting until I was over fifty to start writing.  By then, I’d been married for almost twenty-five years, and I’d forgotten everything I’d learned about picking up women.  That in itself was surprising, as the extent of that lost knowledge would have fit on a mini-Post-It note with lots of yellow space left over.

Every evening at dinner, E.B. held court at his table, surrounded by fawning penwomen.  Mr. Heron apparently has one thing going for him that the other handful of males at the conference did not.  It may have been the feathers.  If so, then the secret to male enhancement is not to be found in some pill.  Rather, it lies in a bucket of tar and a couple of large pillows.

That Saturday night, I had to suffer through the keynote speaker’s rant about how women have such a superior sense of humor, how they are so far above being amused by the eye-plunking, pie-throwing antics of the Three Stooges.  Well, I will have her know that my daughter went with me a few weeks ago to see the new Stooges move, and she enjoyed every minute of it.  Now, there’s one girl whose daddy raised her right.

My wife unwittingly allowed me to attend this conference alone.  She happened to be in Yankee Land attending to some matters, and she texted me later that same evening to let me know she was having a good time in the company of my brother.   Apparently, they were out partying it up in some barn.  I had only hoped that, whatever they were doing, they were doing it on the ground floor.

I knew what was going through her mind when she texted—me at a writers conference, huddling with a bunch of pipe-smoking, Ernest Hemingway types, going on about participles and punctuation.  She wanted to rub it in.  Little did she know. 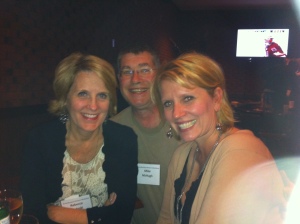 I was in the hotel lounge when it came through.  I was huddling with some writers alright, and I couldn’t let her one-up me like that. So I posted the photos you see here to her Facebook page.

My phone buzzed with her special ring tome in about the amount of time it takes to split an atom.  I knew I’d had her beat.  She’s no more attracted to my brother than she is to Larry Fine.

Seriously, I made a lot of good contacts that I’m sure will be of benefit to my writing career.  And there was none better than Mr. Heron himself.  He and I hit it off well.  In fact, he even expressed an interest in coming along when we make our annual pilgrimage to Key West in a couple of months.

Stay tuned for that.

3 responses to “The Virgin Writer”

Leave a Reply to The Dang Yankee Cancel reply